This page is dedicated to the dogs that people have adopted from GSRSV, their guardians, and their canine companions. Share the love that you have for your GSD/GSD mix with others!

Feel free to submit your own picture or story that you'd like to share on this Website to Brian Foran at bab43@msn.com. Please try to keep picture file sizes to 2 MB or less.

Garth, a then-2-yo male GSD that GSRSV rescued from the Stanislaus County Shelter 11-6-15 (adopted 12-12-15), sent me this awesome picture book telling how happy he is with his adopters, the Christensens of Antioch. Katie, one of the two Christensen daughters, helped Garth handle the pen! Thanks for the good news, Garth! 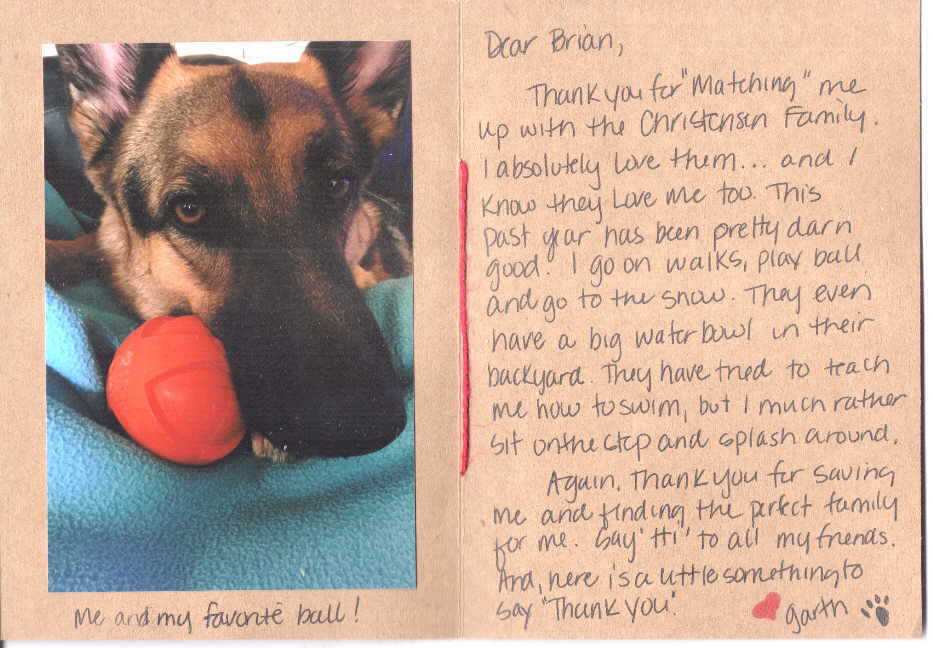 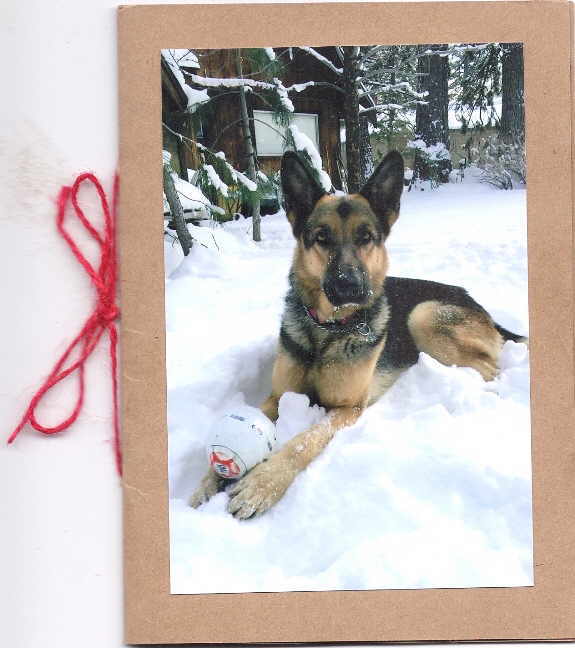 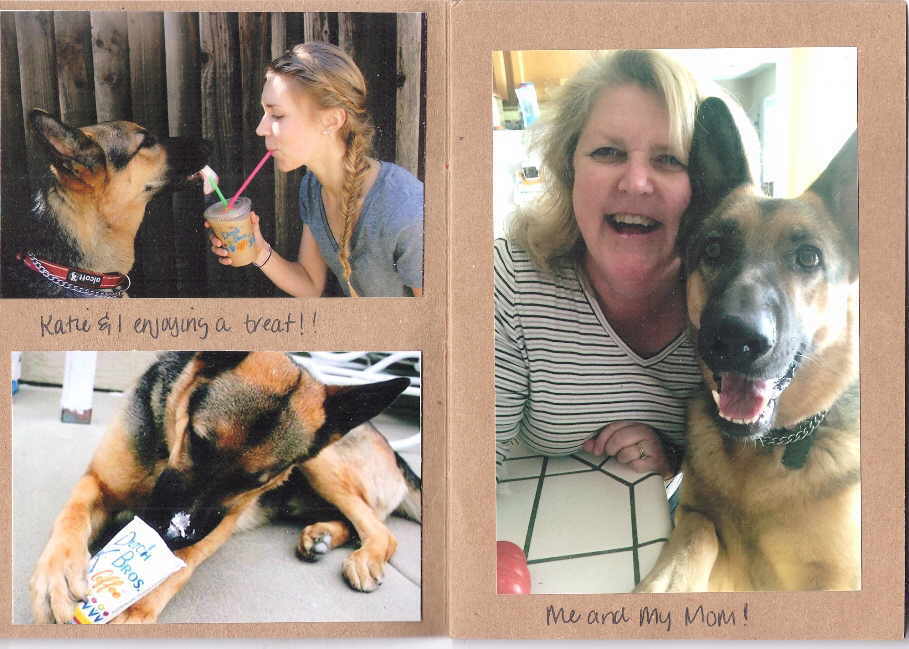 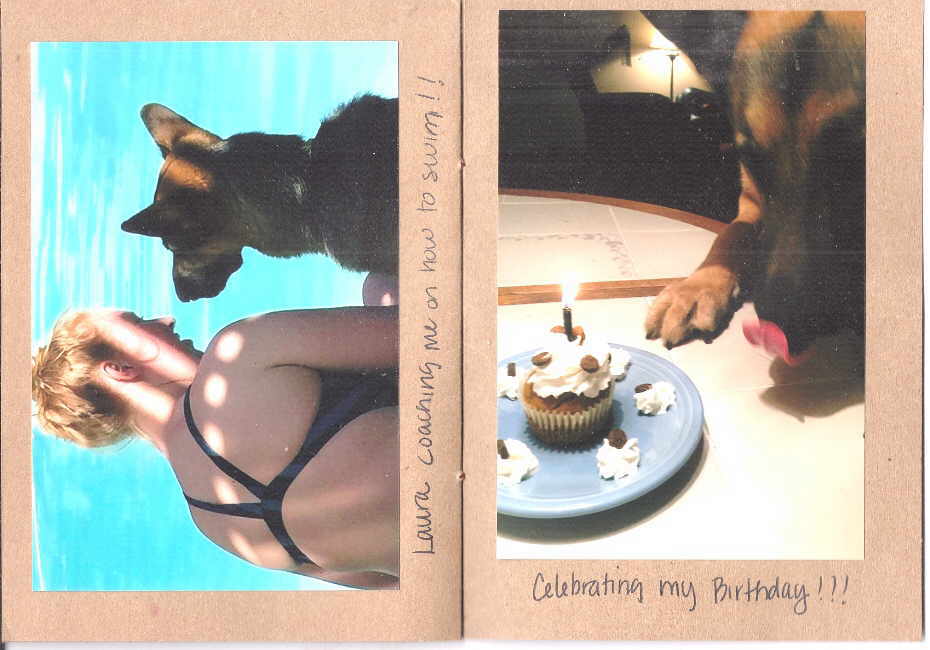 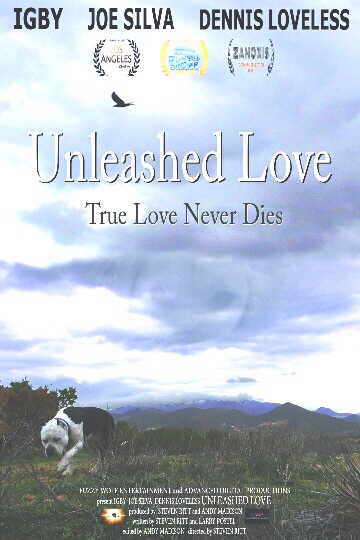 Ready for a Good Cry?

The 11-minute film "Unleashed Love", created by animal trainer Steven Ritt and film maker Andy Madison, will likely leave you tearful but inspired just the same. The film, viewable online at TheAnimalNetwork.TV, celebrates not only the bond between people and their dogs, but even more so the bond between two dogs. Plus, the soundtrack is enchanting.

TheAnimalNetwork.TV is "dedicated to educating and enlightening people about animals, animal issues, and rescue thru creating and delivering unique programming for animal lovers everywhere." Though it is a for-profit enterprise, 15% of all proceeds go to animal rescue. 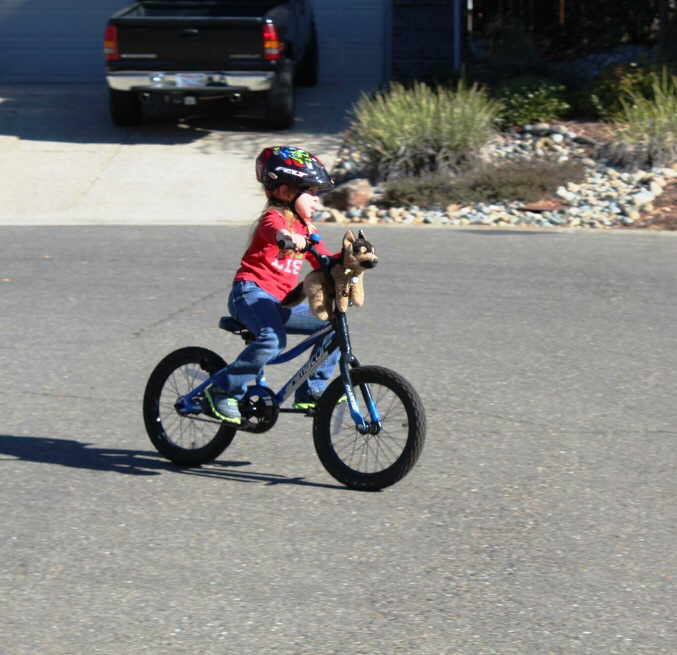 That's 5-yo Rowan Turner-Hinaman taking her first bicycle ride on two wheels in 2013--led by her faithful GSD stuffy "Shep." 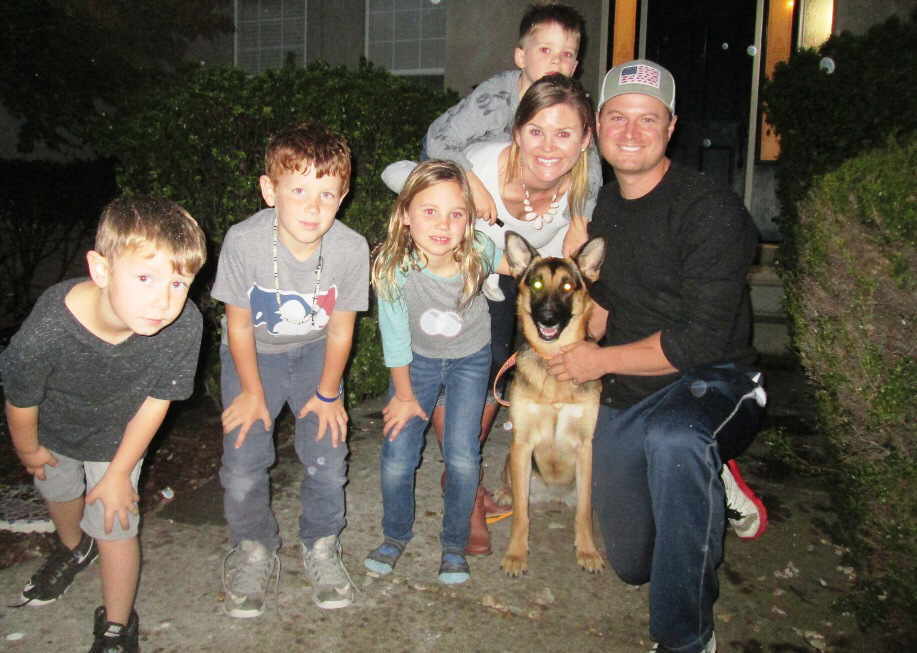 Three years later, Rowan (third from left in photo at right) and her family adopted Zaila from GSRSV. 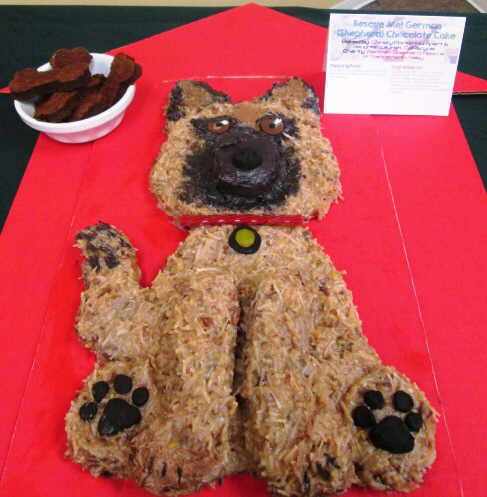 Lauren Humpbert, an 8th grader at the Sacramento Waldorf School, created and baked the uber-cute cake at left (with help from her mom, Christy) to raise funds for GSRSV. Christy, an employee with the State agency Cal Recycle, entered the cake in a silent  auction 9-13-16 held at Cal Recycle's headquarters in Sacramento in conjunction with a promotional event for the Calif State Employees Charitable Campaign.

Lauren chose animal rescue as the topic of her 8th grade project. She is working in conjunction with both GSRSV and El Dorado County GS Rescue.

High-five to Lauren for choosing to focus on animal welfare for her class project. 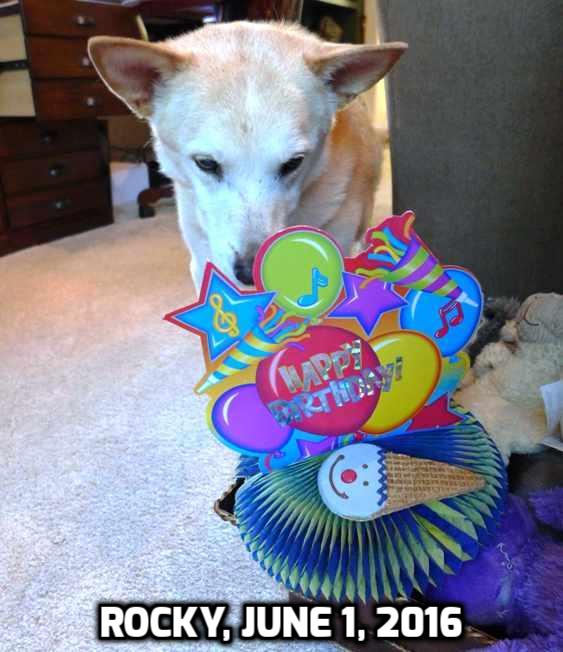 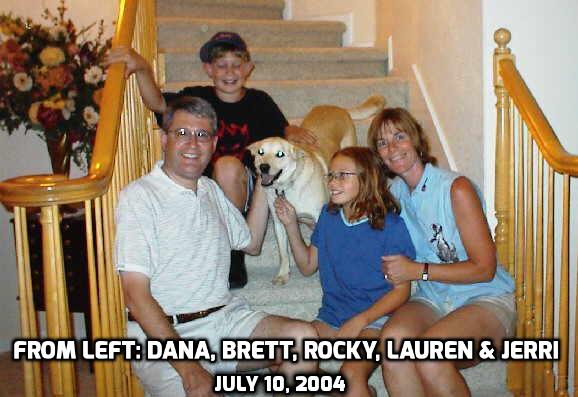 Here's something to celebrate: Rocky, a GSD/Terrier/??? mix adopted from GSRSV by the Davis family of Roseville (now in Land Park) on July 10, 2004, turned 16 years old on June 1!

Rocky is still spry and still goes for daily walks. He is very much loved by all of the Davis family, but especially Lauren (now in her third year at Colorado State Univ) and her mother Jerri.

Lauren used to volunteer at GSRSV's rescue ranch, and Jerri slaved through the process of applying for GSRSV's non-profit status.

Thank you to the Davis' for giving Rocky such a long, happy life.